One of my favorite days of the year is the Trace Creek Crop.  Yesterday was a day that my friends and I look forward to for months and months.  We got signed up in December and then you impatiently wait until it's here.

I didn't have extremely lofty scrapbooking goals yesterday. I am still until that stupid weight restriction and I wasn't sure I would be able to sit all day. In all actuality I found that I could sit for a while, get up and shop or just walk around and talk and I was fine.

I accomplished 3 scrapbook pages (I am almost finished with the October cruise, then onto the Christmas Harry Potter).  I made one cigar box (which I plan on doing a tutorial to very soon), and 16 cards. 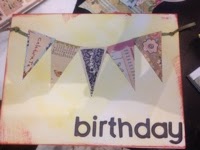 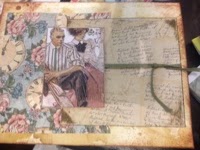 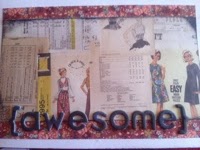 Most of the cards that I made were completed using the Lucille paper pack.  I found this in October at Archivers and it has been a constant favorite since then.  It is reminiscent of the old fashioned clothing patterns my grandma used and the floral papers are very much like the patterns of dress that I wore in the 1970's.  I spent $12 at one of the booths yesterday to get some Lucille chipboard and tags. The other paper that I used was another favorite, Ladies Diary by Graphic 45. 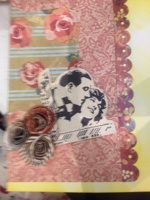 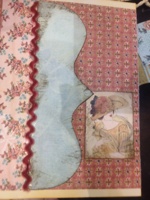 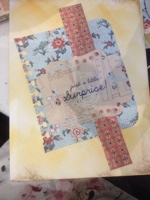 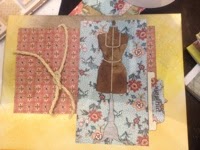 I found this cute little birdhouse in the dollar bin at Michael's. I decided it would be good in my laundry room make over so I purchased it. It was a paper mâché finish. The first thing I did was gesso the entire thing so I could paint over t and get true colors to my paint.

I chose the colors that I have been using for my other utility room projects. I thought it might be nice to try an ombré effect since e that was so hip. One thing I dot usually rinse my brush between colors. Actually I hardly ever rinse my brush. You can tell, but I really like the effect.

Once my paint dried, I took some walnut stain distress ink and a new dry brush. I brushed the brush against the stamp pad then dry brushed onto the house. The effect turned out nice. 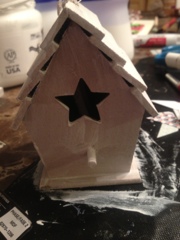 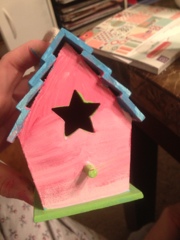 Posted by Michelle's Musings at 8:22 PM No comments:

I had read somewhere, probably Pinterest, about a girl that made roses from newspapers. I don't recall ever reading how to make them, but decided that I wanted to make some for this utility room makeover thing I am doing. Actually I am planning on framing them.....after I make the frame that is.

Since I didn't read to tutorial I had to make up my own. I took a newspaper that was still rolled up from the driveway and cut the roll into pieces. Quite like you
would if you were slicing bread. My slices were about 1-1.5 inches thick. After I complete the slices, I unrolled the slices and glued them end to end....making a long strip. It did sort of roll up on itself, but I thought that would be easier to make into a rose. I actually used a glue stick to glue my strips together. Then I started rolling. I would roll a bit and then twist the newspaper to make what would appear to be a petal. I just kept repeating the process. When the flower was as large as I desired I cut the strip and glued it under my flower. Then I started rolling the next flower. I got 5 flowers from one a newspaper.


Once I finished with the last flower I started painting the flowers. I used a pink and a red. I poured both into my palette next to each other. I used mostly pink to paint the flower, then I dipped my brush without cleaning in the red. I brushed it too the flower in other parts. Then I loaded my brush with pink and red and went over it again.

I repeated the process with two shades of blue and the same brush. Therefore I got a tad of purple on these flowers.

I liked the effect hope you do too. 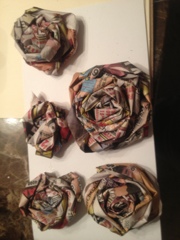 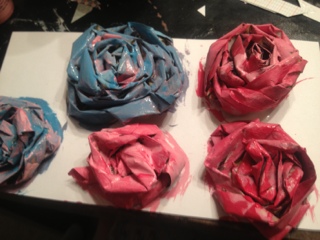 Posted by Michelle's Musings at 8:16 PM No comments: