Jamie Ford is the author of "On the Corner of Bitter and Sweet" . I discovered him a few years ago from the McCracken County Library.  You see, I do choose books by their covers...and I saw the cover of the book and immediately checked it out from the library.  I instantly fell in love with the book.  As a matter of fact, I got on google to see if Jamie Ford had written anything else. Nope, this was his first novel. First novel?  Wow!  What an accomplishment.  I followed him on Twitter and his blog.  I discovered that he was indeed about to have a second novel published.  So I waited.  During the wait, my friend DiAnna told me that there was a scheduled event in March of 2014 to meet Jamie. I quickly added it to my calendar and countdown app (an app that featured my trip to Hawaii and a cruise).

Eventually, the release date was set and Jaime had an offer that if you bought the book from a presale (the written copy), he would send you a digital version.  No brainer there...sign me up. I received the digital book and thought it a wonderful accompaniment to Bitter and Sweet.  The wait ensued.


By reading Jamie's blog I learned that he prefers paper books to digital, so I was surprised he sent out a digital publication and decided to make a paper edition of his supplement.  My intention was to give it to him in March when I met him.  (I featured a tutorial on this book a while back....http://michelle-champion.blogspot.com/2014/03/saturday-afternoon-book-making.html).  Once the book was finished, I debated giving it to him.  I actually tossed the idea around for a while on would he care, would that be weird and all the other questions that weird fans would think of.

At last, the day came...actually the day before the event. Jamie had to cancel due to a stupid snow storm.  For those of you that know me to know that my husband is a meteorologist and this PROVES once and for all that husbands don't listen to their wives.  I begged and begged him to keep the storm away.  No such luck, the event was postponed.  I imagined I would never get to meet him.

But wait, last week Jamie posted on his blog that he was coming to KY. Not just KY, but Paducah.  This was it!  I was going to get to meet him and tell him how much I enjoyed his books.  Armed with a copy of Bitter and Sweet and Willow Frost, a copy of the digital publication and the book I made...I made my way to WKCTC. 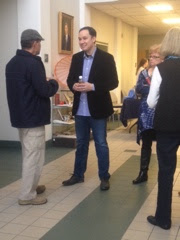 I arrived early and there was a reception going on.  I saw him immediately.  I waited for a moment, texted my friend DiAnna that I was there and waited some more.  Then I decided to approach him.  I introduced myself and he was very familiar with who I was from my Twitter stalkings.  We chatted for a moment and a dude came up to him to get his books signed, the moment was gone to ask him about the book I had made.  I went inside the auditorium and got a seat in the front for both DiAnna and myself.  I saw him in the back of the room and grabbed my books and thought I would try again. We chatted again for another moment or two and he signed my books of Bitter and Sweet and Willow Frost. 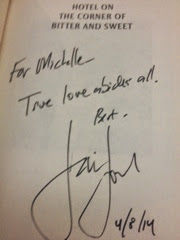 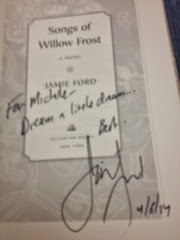 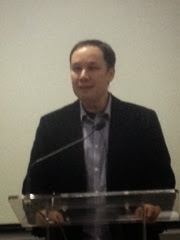 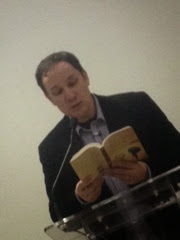 DiAnna then arrived and the lecture began.  It was very informative.  Perfect for a book lover.  It was the first lecture I had ever attended on a book and it won't be my last.  During his talk, I learned he was not only a great author, but also witty and charming.  He has a lot of good stories in him.  I told my friend DiAnna his writings are so emotional that it is kind of rare for a guy to write like that where I am so moved by the words. I read LOTS of books.....most male authors (unless they write crime) cannot paint a picture with words.  He not only does so, but it's a lovely picture, even if the subject is unpleasant.  To me is astonishing that he only has two books under his belt.  He writes like a very seasoned author.  I'm excited to see how far he will go.  Oh, I got off topic, I just wanted you to know how much I enjoyed these books. 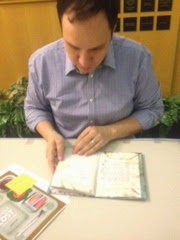 The lecture is over and he is going to sign books.  I got in the line to sign books and when it was my turn I laid down the book I had made.  He looked a bit surprised at what it was because it was something there is no way he could have seen because I am certain he does not follow my blog.  I explained that I knew he preferred paper books and when I got the digital book I felt it had to be in paper.  He said he had never seen it in paper.  I got a bit braver. I said, "I made it for you, but if you don't want it or are going to throw it away I want you to just sign it and I will keep it".  He said no he loved it and asked ME to SIGN it for him!  Then he told someone he wanted a photo of the two of us with the book that I had made for him.  What an honor!  I was so glad that I got the guts to give him the book. 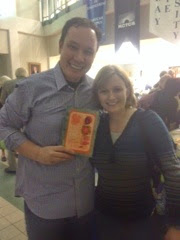 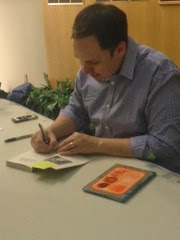 What a wonderful evening it turned out to be.  And now that it is over I sit and wait for the next Jamie Ford novel. 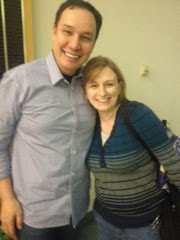 
Posted by Michelle's Musings at 4:55 PM No comments: