I had this configurations box and I wanted to make it for my friend DiAnna. I wasn't really sure what to do.  I first found some paper that I loved and covered it in that paper. I used the Blue Awning by K&Co.  I completely covered each little box, then the big box as well.

I thought about her personality and she loves BOOKS. I mean she loves them like I love them.  I thought it would be nice to make her some books. I covered the books in Pocket Full of Posies paper by DCWV.  It was sturdy and also colorful.  The inside of each book has a paper with words, actually, each one has its pages made from an old Bible that fell apart (again that is perfect for DiAnna).  I put the books together, did the binding, then inked the outside with Walnut Stain by Tim Holtz.  I glued the books in a couple of the cubes. 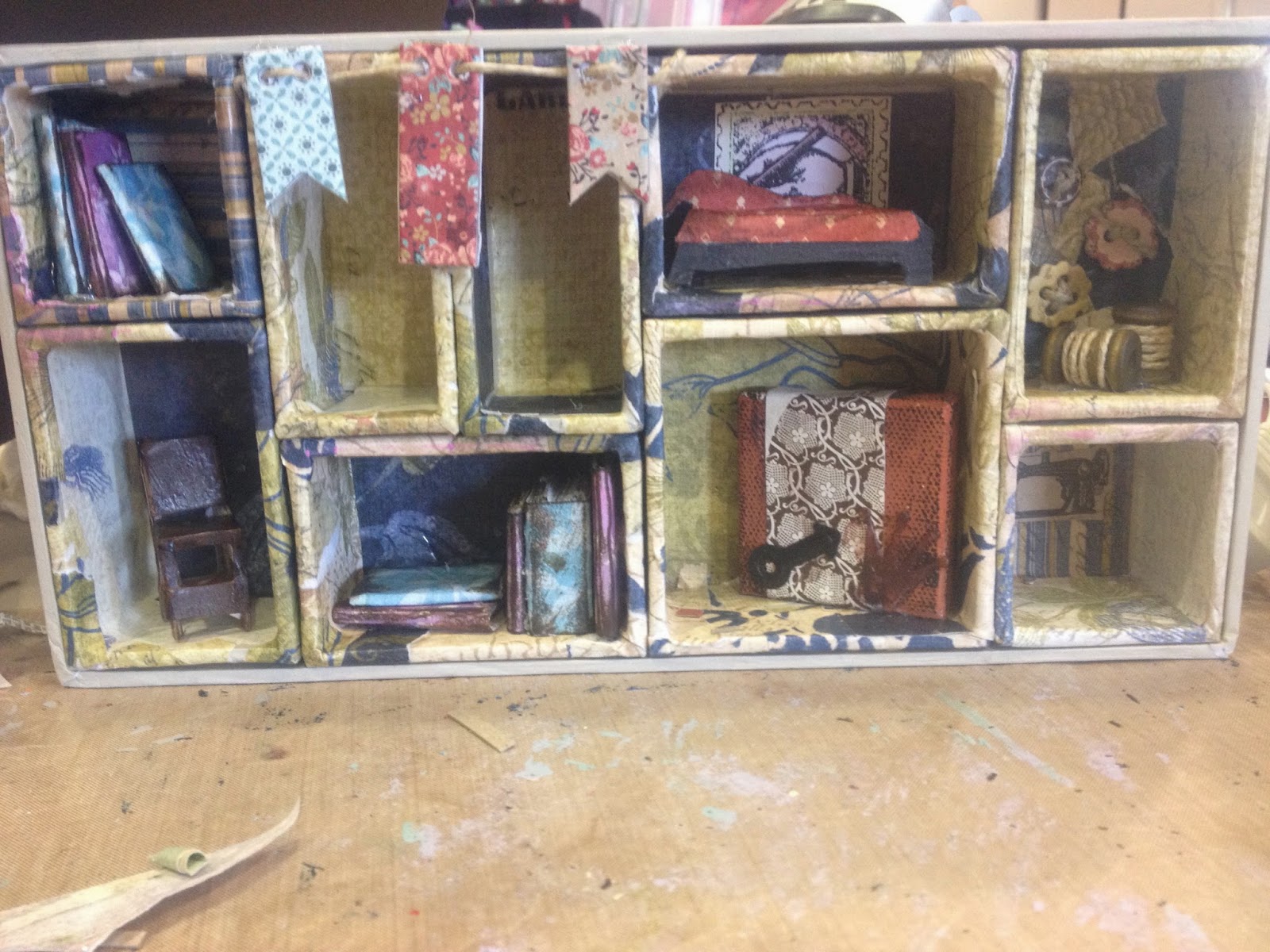 When I asked DiAnna what she would like, she wanted a chair and a sofa to go in her library.  I had nothing in miniature, so I had to make it.  I started with a sheet of cardboard.  I cut out the sides, the chair seat, the rungs and the back of a wooden chair.
I put it all together using Aleene's glue, hot glue, and mod podge.  It took a long time to make it all work but it did.  The couch was going to be a challenge, but I was up to the challenge.  I once again used cardboard for the back, the legs and the body of the couch.  The seat of the couch was made by rolling up paper for the cushion and using thin paper for the fabric.  I fixed it into place with mod podge.  Once it was dry, I gave it a little walnut stain inking. 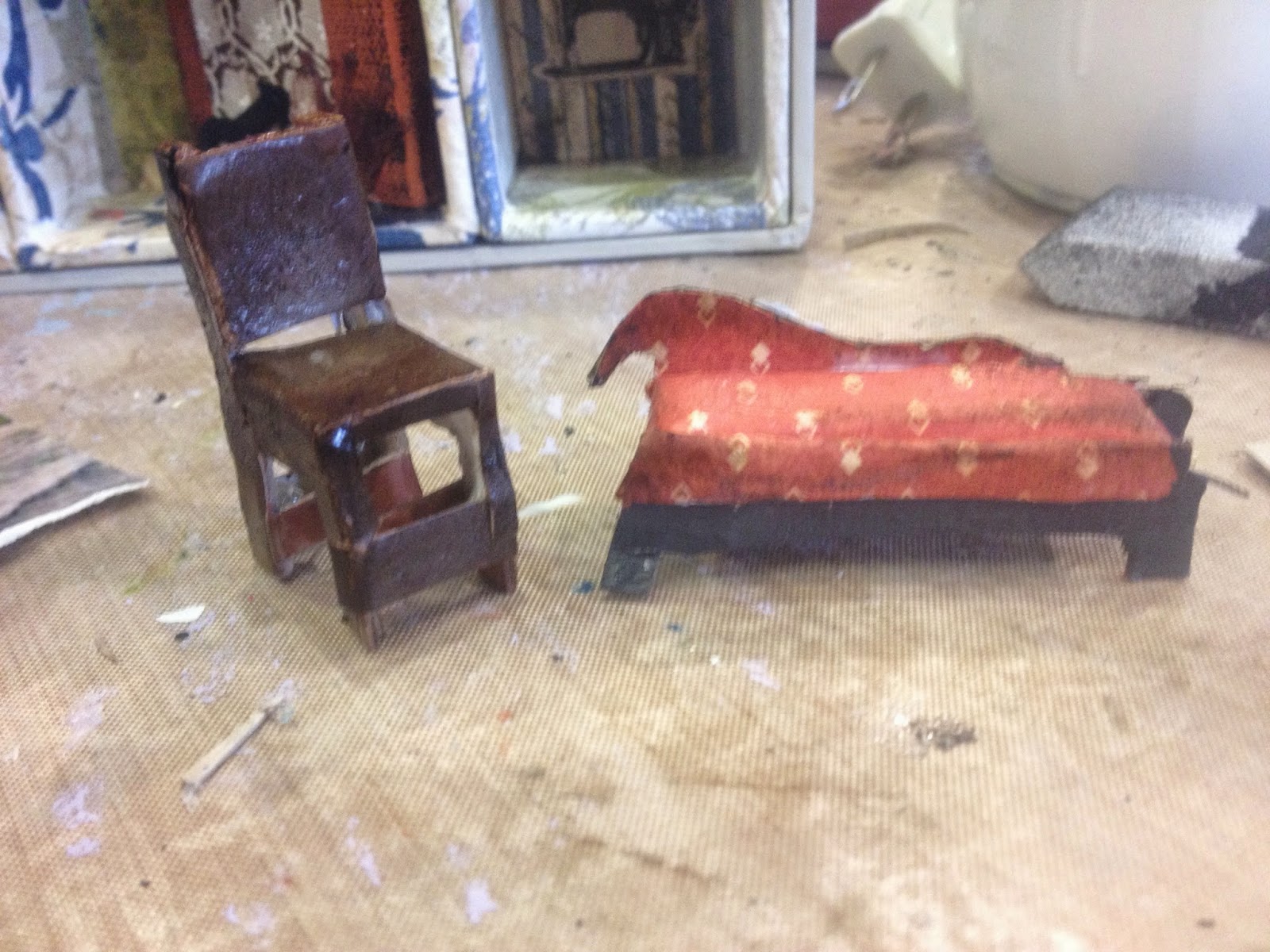 I added some spools because DiAnna likes to sew, a canvas covered in paper because she likes to do mixed media canvas art and some "art" for the back of some boxes.

I "framed" a portrait of a lady to hang on the "walls" and Dianna asked for a dress form and a globe.  The globe is made from a button and a stand I created from cardboard.  Like everything else, it was inked with walnut stain.  I created the land on the globe from green scrap paper.  The dress form was cut from a sizzix die that I own.  I cut 6 layers of the dress form and glue them together to make this stand up.  I created a stand for it as well.  I added some basic grey pennants and more ink and it was finished.

Hope DiAnna likes it half as much as I enjoyed making it. 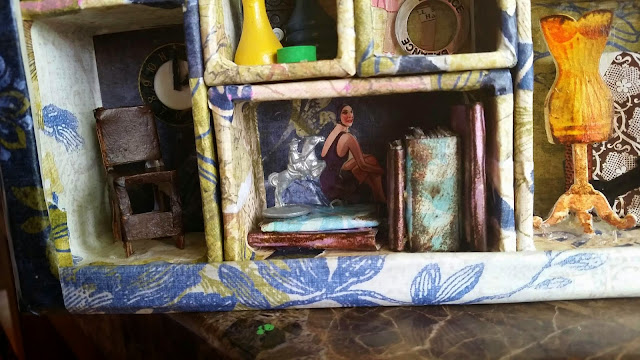 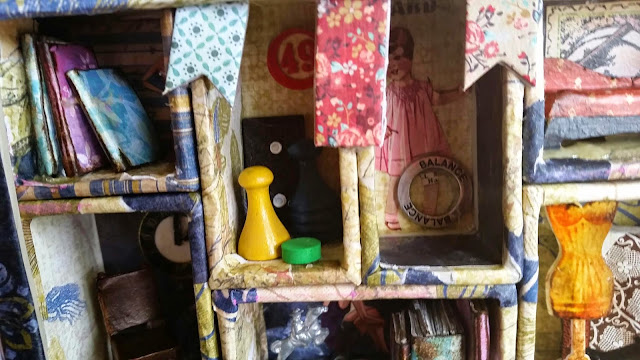 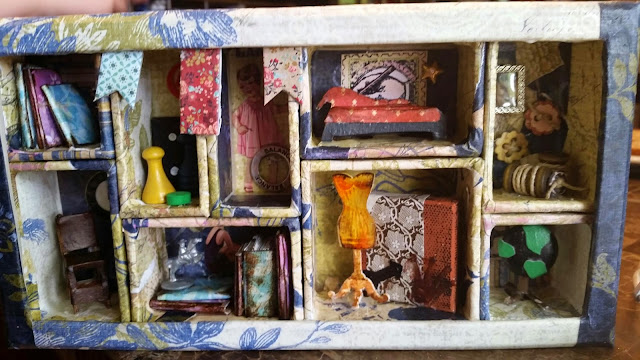 Posted by Michelle's Musings at 6:02 PM No comments:

Summer vacation has started.  During the summer, I always make goals to accomplish a lot of stuff on my list.  This summer I plan to replace a board on my deck, to fix my kitchen sink (it's leaky), to make something for my soffit in my kitchen, to finish my decorating in my kitchen (I am working on a coffee theme), clean out the garage, touch up paint in the living room, make curtains for my bedroom, and organize my store room.  Most of these tasks are very inexpensive (like free---only my time is involved). 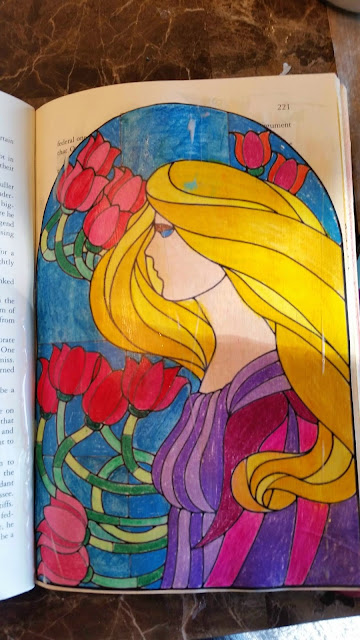 I have started the summer by creating some art.  My first work was this stained glass picture that I found on the internet. I used prisma color pencils.  There is green on her hair. It is not on the picture so it must have been on the camera lens.  This was placed in my art journal, which is an old hardback book. 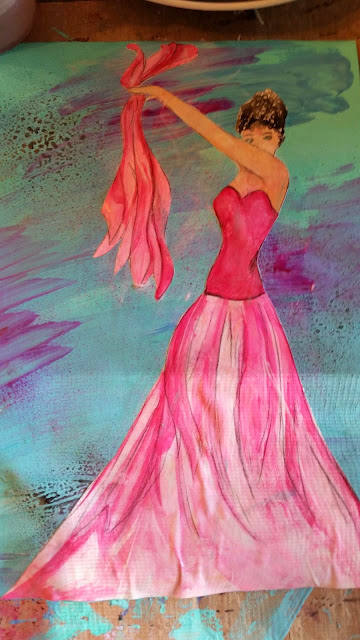 The next little painting is a canvas paper that I painted in many colors and then sprayed with my Michelle's Musings sprays.  I drew a girl on a sheet of mixed media paper and then painted her with water colors.  Once she was dry I cut her out and glued her onto the canvas.  I think she is pretty cool. 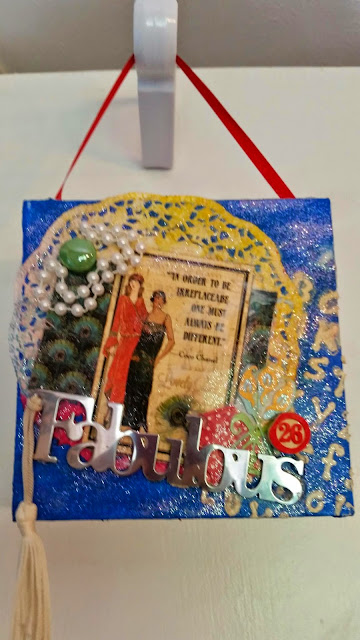 Next was a 6x6 canvas that I picked up at Dick Blick. I painted the background blue, and added a stencil wood icing letter thingy.  Then I added a doily that was done with Michelle's Musings sprays, some Graphic 45 papers, a die cut I made from my cricut (using Art Nouveau), a Fabulous metal piece that I have had for years, some pearls, a bingo chip, a tassel and a pebble.  Finally I finished it off with some glitter, just what my friend DiAnna loves.

The last thing I finished was a color book I made for a friend of mine.  She had a baby like 12 weeks ago, and I am just now finding time to finish this.  I made one of these for my daughter many years ago, she wore it out.  I redid it when Trevor came along and I got it out the other day and saw, he pretty much destroyed it too.  I hope this little guy likes it as much as they did. The first photo is the one I made for Braxton, the second photo is the one that my kids chewed to bits.  It won first place in the Arkansas State Fair with Hannah and the redid version won Best of Show at the McCracken County Fair. 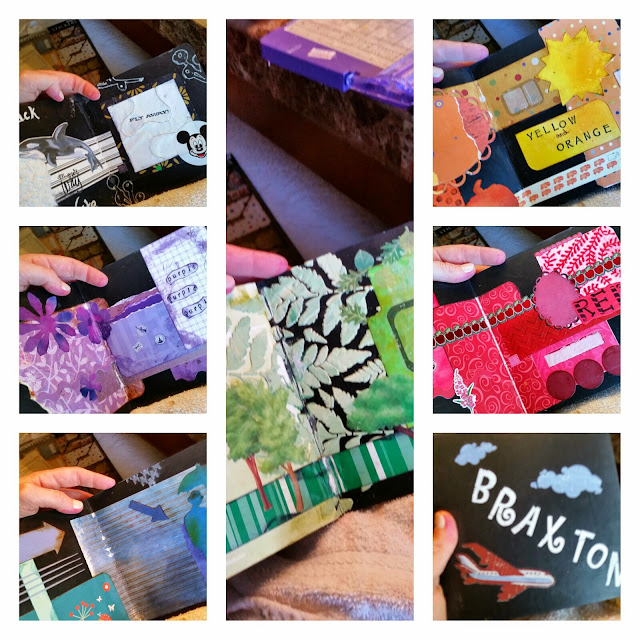 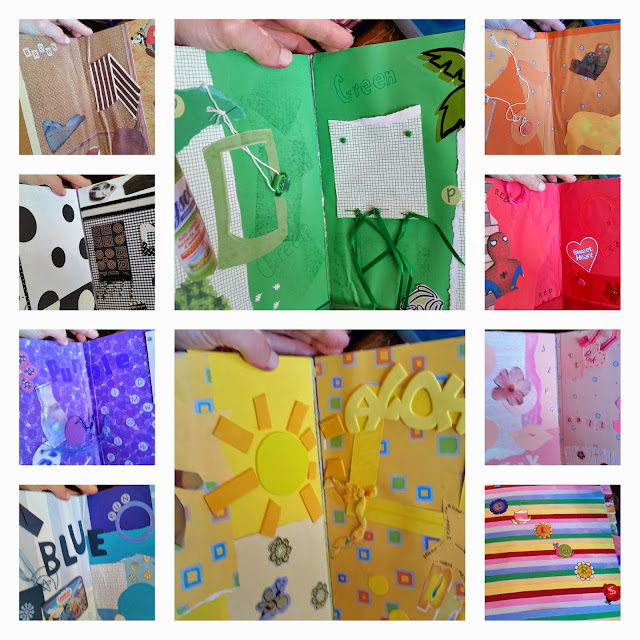 Posted by Michelle's Musings at 4:24 PM No comments: